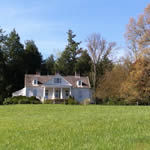 Admission to the grounds, trails, barns and outbuildings is at no charge. Donations are accepted at a box near the parking lot. The house tour is $5.00 for Adults 16 and older and $3.00 for seniors 62 and older. Children 15 and under are admitted free. There is no charge for America the Beautiful and Federal Golden Passport holders.

Accessibility
If you are unable to walk to the main house, call for assistance on a phone at the parking lot or at the information station.

30-minute house tours are offered every day, once an hour. The first tour begins at 9:30am with the last tour at 4:30pm. Tours are limited to 15 persons, no reservations, first come.

Paula Sandburg owned and operated a premier goat dairy from 1935 to 1965. Visit three breeds of goats. Park rangers and volunteers will introduce you to the herd and answer any questions. In Spring, see the new baby goats!

There are five miles of well-maintained trails.

Carl Sandburg is the author of several volumes of poetry. You are probably familiar with at least some of them; Chicago, Fog, Grass or Arithmetic. He wrote two biographies of Abraham Lincoln and one of Mary Lincoln. He wrote a number of children’s books including the Rootabaga Stories and Abe Lincoln Grows up. He won three Pulitzer Prizes, two for his poetry and one for his biography of Abraham Lincoln.

Carl Sandburg was perhaps the first American urban folk singer, accompanying himself on guitar at lectures and poetry recitals. He began collecting American folk songs when he was 19 years old. He published three song collections which became very popular. He would entertain audiences after poetry recitals with these songs. He was awarded a Grammy Award in 1959 for his recording of Aaron Copland’s Lincoln Portrait with the New York Philharmonic.

Lilian Paula Sandburg was a Phi Beta Kappa graduate of the University of Chicago and became a school teacher. In the early 1900’s Charles and Lillian, in their 20s were active in the Social-Democratic party. They began to correspond, sharing their poetry and discussing politics, philosophy and art. They married in 1908. She preferred Carl, his birth name and he called her Paula. In 1935, to make ends meet, Paula Sandburg began raising goats. She began to research the benefits of goats milk and breeding for milk production.

Lilian Paula Sandburg was sister to Edward Steichen, an American photographer, painter and art gallery and museum curator. He was the best known and highest paid photographer in the world, taking the first modern fashion photographs.

In 1945, Carl Sandburg and his wife moved to Flat Rock where they lived the next 22 years. Connemara is one of the best-preserved writer’s homes in America.

“The home’s original owner, Christopher Gustavus Memminger, christened the structure as Rock Hill in 1838. An orphan born in Germany, Memminger was raised by Thomas Bennett, who later became governor of South Carolina. Memminger was such a success as a lawyer that he amassed the funds to build Rock Hill by the age of 35. When the Civil War broke out, he chaired the committee that drafted the Confederacy’s constitution. Jefferson Davis appointed him secretary of the treasury, a position from which Memminger organized the entire financial structure of the new country. But such responsibilities took their toll. After three years on the job, Memminger was forced to resign because of poor health. He retired to Rock Hill but kept in touch with his colleagues. When it appeared that Richmond, Virginia was in danger, he wrote several leaders suggesting that they move the Confederate capital to Flat Rock, which could be defended more easily. Legend has it that Jefferson Davis sent the Provisional Seal of the Confederacy to Memminger in Flat Rock when it became evident that Richmond would fall. The seal has never been found. Some say Memminger buried it on Glassy Mountain behind Rock Hill.”

Directions To the Carl Sandburg House from Meadowbrook Log Cabin

Meadowbrook Log Cabin is about 10 or 15 minutes from Connemara.

Turn right on US-25 and go south through town toward Flat Rock.

Visit My Other Sites